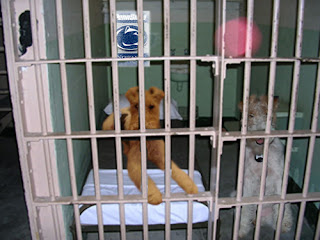 Well, well, well....Since I was very busy babychasing Stella at the pawty this weekend, I did not hear bout this. It seems that Koobie and Scruff did NOT fall off the trolley in Boston as we all thought...they jumped....well...Koob jumped and turned and caught Scruffy. Evidently Wussy Scruffy Wire was scared to make the plunge.
It seems they "borrowed" AireRuby....um...and had a small amount of difficulty landing her. I don't think the Penn State band appreciated having to run off the field at half time to avoid being struck by an errant plane being flown by a fox terrier. I'm not sure which foxy wire was flying...but it really doesn't matter...they got thrown in jail in State College.
Evidently, it didn't diminish their Penn State spirit...note the PSU logo on the wall of the cell. Big Bruvver was at the game and went over and bailed them out. Mumsie doesn't know about this one yet. And I don't think we're telling her.
We wondered why AireRuby had all of that turf stuck to her tires, not to mention several band instruments still stuck to the wings.
Ruby, I don't know what to say. Scruffy owes you really big for this one.
Lacie
Pee Ess.....Check out Blue's blog to vote for where she should hold her Creepy Pawty this week....HURRY!!!!!
Posted by Scruffy, Lacie and Stanley's Place at 1:33 PM

Scruffy & Lacie!! You're the bestest pawty hosts!! Thank you so much!

Oh Man Scruff...my Mom was NOT happy about all the clean up of Aire Ruby...especially since it needs to be all sparkley for Ike's wedding later this week. Fortunately, she's still feeling all guilty about leaving me at the Wag so she is over it. But she did say I couldn't let anyone else fly it without her permission!!!

Hope you get out of jail soon!

Lacie
I just don't know what we'we going to do with these two..and it seems Koobie is the instigatow this time...Ruby is a vewy genewous and patient fwiend!
hope youw mom doesn't find out,hehe
smoochie kisses
Asta

Hey Pups, I think I missed one doozer of a party, and a game!

Ooops! Sorry about the jail time... but sure it worth it!
I can't wait to see what these two are going to do the next party!
Have a nice day
Lorenza

Oh my Scruffy, you are a crazy pooch! 'Borrowing' Aire Ruby, crashing at Penn State, what a night! Glad your brudder was ther to bail you out. Better hope your mommy doesn't find out.

Is that what happened? I thougt we went to the World Series. I must be confused, again.

Is there another pawty this weekend? Great!!!!

Um...maybe those two should wear leashes next pawty. How can we take them to proper (if Jolly) old England if they won't behave!

Oh no.. I hope Scruffy and Koobie gets out of jail soon. It's nice of you to babay sit Stella and Cassidy Lacie. :)

Is Scruff rubbing off on Koobie? Could he be turning her to the dark side? I mean, I love the ScruffMan, but c'mon, we're talking about sweet little Koobuss with a criminal record. Hard to imagine.

Good thing Ruby is so understanding... we could be talking legal action of another kind otherwise.

Thanks again for watching the StellMonster! It was good to have a night off.

Oh man, I hope Scruffy & Koobie will be freed soon. It was nice seeing you both at the pawty!

Oh wow...you guys sure know how to pawty! Do you need us to buy you a get out of jail free card?

woofies Scruffy and Lacie!!! heehee me will sneaky a saw blade to u's.. dat way u can gets outta jail b4 blues pawty and da weddin...shure hopies Ruby gots my recervations...heehee me wondereded how me got so wet, me fought it wuz hot flashes....

Lacie!
That is totally unfaiwthat you had to be gwounded just because scruffy messed up..i weally missed you at the wedding..thewe was no one thewe to giggle ovew things with...I think it would be pawsomely pawfect if you came and helped me nuwse Jackson..Asta down undew is also his nuwsie, and last time he was sick Janie helped too..but i don't want to think about that...anywayI bet you miss Dunstan, so we should just head ovew and go fluff pillows and give love and encouwagement!

I'm flattewed that scruffy liked my dwess so much..I had no date fow the wedding you know, cause Stanny went with Ruby.it's hawd to shawe sometimes
smoochie kisses
Asta