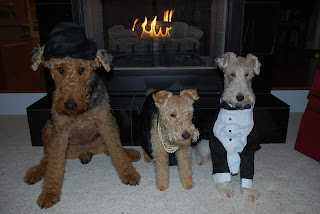 To all our friends around the globe...we wish you the happiest of New Years!!! Best wishes for a year full of love, laughter and fun!!!

Posted by Scruffy, Lacie and Stanley's Place at 8:20 PM 24 comments:

Posted by Scruffy, Lacie and Stanley's Place at 5:45 PM 79 comments:

Scruffy here....not an unusual picture of Lacie....BUT, did you hear they have discovered a new Dracula dinosaur??? Yep, check out this link.....Lacie's Grandma....it will tell you all about this prehistoric creature.... 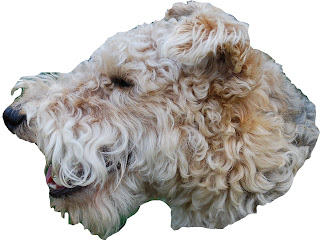 Now we were snooping around and found this picture in Lacie's box of keepsakes....sheesch...looks just like the witch, huh????? 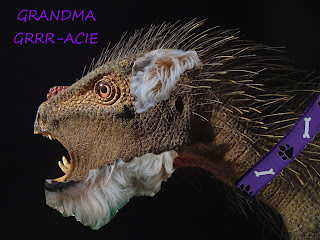 Grandma GRRRRRRRRACIE...Mango would have loved this picture.....the article mentions the creature's parrot-like beak and vampire fangs....Spittin' image of Lacie. 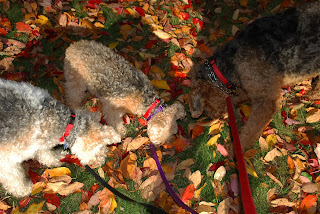 Check out our walk from this weekend at the park......lookit those leaves!! 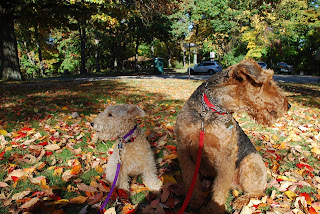 Stan and Lacie showing their usual amount of affection. 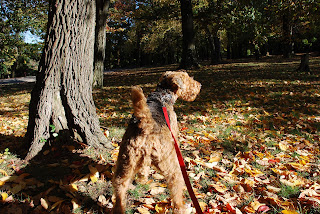 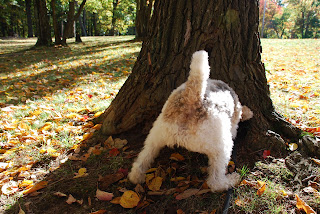 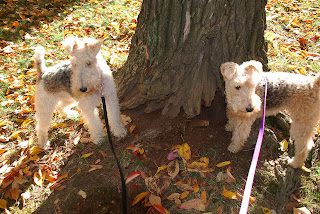 Stay on your own side of my tree, Lacie. 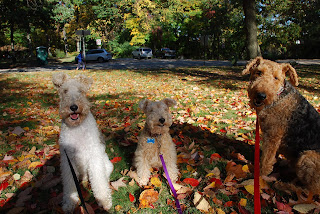 We love our walks! 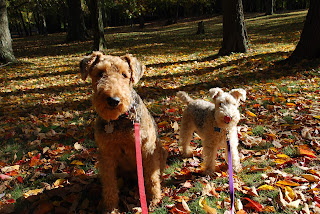 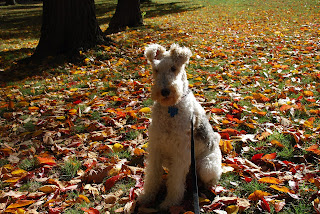 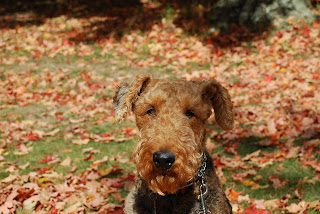 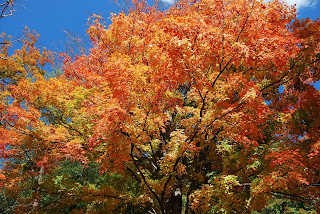 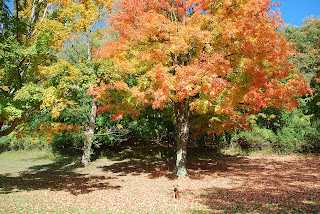 Sometimes life is just all about perspective, huh....

Scruffman
﻿
Posted by Scruffy, Lacie and Stanley's Place at 11:31 AM 21 comments: 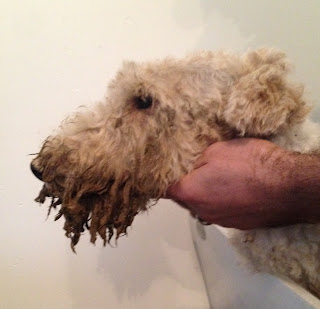 Mumsie here....it was so my fault. We've had an electric fence now for five years. The dogs have been great with it...so I became complacent with the collars.

Today was a beautiful day...dogs were outside with us all day...planted some mums and came inside and realized Scruffy was still out. Called him...no dog...looked in all usual places like under the deck. No Scruffy.

Realized as I had been stripping him this morning he didn't even have his flat collar...no ID. He is microchipped. John was looking in woods...have acres and acres behind our house. I got in the car and drove the neighborhood...Susan, Brian and my neighbor were all out, too. It was getting dark. Susan called me out of breath from running and said John found him. He barely saw him. He was in the woods very close to our house but out of the electric fence line. And he was ALL THE WAY IN a ground hog's hole. John said he never made a sound...he called him....no response. He got right beside him and Scruffy kept digging and digging...only his tail was visible. The rest of him was in the hole. John pulled him out and got snapped at for his trouble.

He must have chased a groundhog right out of our yard. He actually had a 6 inch stick wedged in his mouth. I had bathed and brushed him out this morning...not a mat on the dog...tonight, he looked as above...dreadlocks, covered in burrs and muddy bright red paw pads and extremely angry we interrupted his fun.

I don't know how we ever found him. I took him out tonight on a leash and he was very respectful of the fence. We will be doing some retraining and won't be complacent about the collars.....dodged that bullet.

Mumsie who is probably covered in poison ivy along with the rest of the family.

Maybe Mango was in that hole? Watching over us, that one!!!
Posted by Scruffy, Lacie and Stanley's Place at 9:47 PM 25 comments: 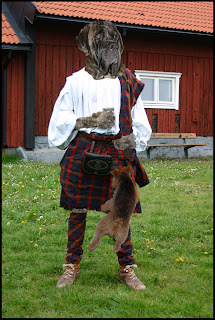 How does one decide which picture to post to honor your life? We have zillions. And each one reflects your Relentlessly Hooge spirit...BIG!

I have so many adjectives to describe you...cocky, sarcastic, flatulent, drooly, fabulous, witty, rude and oh, so very very funny. I remember trying to describe your new (then) blog to someone...helicopter, Hector, understated and really big dog all come to mind.

I can't write more now as the screen is all blurry for some reason....but this pic is how I choose to remember you...hot, handsome, and in a skirt with no undies on.

I know there will be a HOOOOOOOOOOOOOOOOOGE new star in the Heavens tonight...but Mango as you run and dance and twirl and play with your Raja and sweet Angus and all the others who came to greet you....just remember...we're down here...you're up there...AND I WILL SO BE LOOKIN' UP YOUR SKIRT!!!

And her stoopid brothers, too. And Mumsie who is back with the kleenex again....

Posted by Scruffy, Lacie and Stanley's Place at 8:15 PM 31 comments: