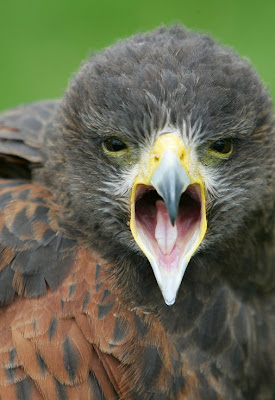 OH GROSS. Mumsie here. How could he...my sophisticated tux wearin' Wire Foxie?? I am NEVER going to speak to him again. He....he....brought a DEAD BIRD into the house and I had to chase him around the kitchen with this little bird foot sticking out of one side of his mouth and some tail feathers out the other. EWWWWWWWWWWWWWWWWWWWWW.....
I was too grossed out to grab the camera...probably a good thing in retrospect. 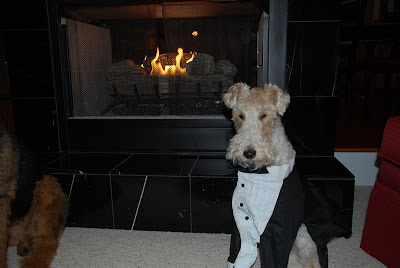 He ran back outside looking like he wanted to bury it...(oh, please...so did I...) but came back on the patio. I gave him the Pack Leader command "DROP IT!" and he chortled gleefully. I then tossed slices of bread at Stanley...Scruff looked interested. (Apparently, he prefers gluten to feathers...) After tossing several handfuls of whole wheat at Lacie and Stan, Scruffy actually dropped his plumage to hunt bread and I slammed the kitchen door with dead birdie outside.
Now...I am NOT a wimp...but this was disgusting.
Dogs...such ANIMALS.
Mumsie

Posted by Scruffy, Lacie and Stanley's Place at 10:52 AM

It must be one of THOSE weekends...

Maybe I don't really want one after all?

Hugz&Khysses,
Khyra
PeeEssWoo: Did it take your little Lacie brain off your LIPS fur a moment or two?

Eeeeuuuuw. Teka is the mighty hunter in our family..toads, birds, snakes to name but a few. I am a terrier of discretion, and prefer to dine on fresh salmon, boeuf (any boeuf) and other more delicate food. But at least I don't barf and poo bloody stuff. You might mention that to Scruff.

Oh dear! What got into Scruffy to make him behave like that? Do you think he had too much eggnog or not enough? (Do ya get it? Birds, eggs. Oh well, it's not that funny.)

Anyway, Auntie Mumsie, please tell Scruffy that he better wash his mouth out with some potent mouth wash before he sees me again. I don't want any part of dead bird breath.

Poor Mumsie! Our Mommy freaked out when Mica caught a little mouse late one night in our apartment. She had to put it in about a dozen plastic bags, environment be damned!

And I almost caught a pigeon one day. I like to lunge at them but I don't know who was more surprised when I actually made contact!!! Yikes!

Tell Scruffy he's a rat dog, not a birddog! (Even if he does like the chicks!)

We absolutely cannot believe you would do such a horrid thing, Scruffy! Shame, shame!
Mitch would have gone for the bread too after the birdie was all slobbed up and yucky!

Tanner did this to Mom and Dad once too. He dropped it right at the foot of their bed and Mom thought Dad was going to faint. He was such a wuss! lol

Many years ago (something like 1000 years ago) we were wild animals without the possibility to go into a pet store to buy some food. It is in our blood. It is genetic !
....ok, I will come back with another idea later...
Kisses, Faya

Oh Scruffy,
You're a good hunter, but hunting the wrong thing! You're supposed to get those nasty vermin. Not the pretty birdies. Koobie is right, better scrub your mouth out. Those bird viruses can be rather nasty. We would hate to see you sick so stay away from the birdies ok???
Luv & Wirey Hugs,
Butchy, Snickers, Ruby, Sylvester & Scuby

Oh Mumsie, My mom used to have a little dog who loved to bring dead birds into the house. He would go straight for her bed with them. Being a bird dog and all, I don't see what the big deal is. You peeps have some weird hang ups.

Scuffie needs to teach me how to do that! Catching birdies looks like fun.

My moomie says better a dead bird than a live chipmunk. One of my angel brothers brought one of those inside to play.

We couldn't catch a bird to save ourselves. Willow often tries but misses by miles...literally.
Don't think you should do that again Scruff...clearly Mumsie doesn't like it.

Good job Scruffy! Not so sure about bringing it to your mom but sure it was fun!
Kisses and hugs
Lorenza

My Mom says she wouldn't be amused either...

My Mom says when Tigger was younger she used to bring "presents' home all the time...My Mom says she is glad those days are over...

Eeeeuwwwwwwwww...yuck...what wewe you thinking Scruffy..I don't think Sunny will want kisses tillyou wash out youw mouf..I wepeat.....yuck.
Mommi is weally happy we live itthe city and she nevew gets to find out what I would be capable of..yuck
smoochie kisses
ASTA

What was I thinking..I must have been in such shockthat Isaid Sunny instead of Koobuss..sheeesh...I'm suwe babyStan would nevew do that
smoochie kisses
ASTA
pee ess..Lacie..do you want me to send you my ice bag???so glad youw lipsesawe bettew
smoochie kisses
ASTA

Oh my oh my...Mom is lying in a heap on the floor making strange gagging sounds. Did you hear her scream when she saw your blog picture? I wasn't allowed to even read half of the post but sort of get what has happened. Mom has one of those things PHOBIAS (can't even say the name)BIG BIG BIG TIME. I have to chase them away for her but crickey ,I'm far to slow to catch them. If I ever did that she would be in a straight jacket and I would be in Battersea Dogs Home. Poor, poor, poor Mumsie.Gross. Mom sympathises big time but is hyperventilating cos she never thought that ...er...we would or could catch one.. I may never be allowed outside ever ever ever again. Pass the smoothies over Lacie...

The Black and Tans. said...

Scruffy. First I must compliment you on your bird catching skills.

Step two is... chase and capture live feathered prey. Now I am a dab hand at this!!! No fence or hedge will ever stand in my way. If you would appreciate any tips on this skill just email me. OK?

It would probably be for best not to take any future victims indoors. I do find the servants can become hysterical.

However, a word of caution. Don't share your winnings. If Lacie of Stan are anything like Taffy you may find that "plucking" of prey occurs and that truly is gross!!!!

That is pretty yucky! The Cat at my house likes to bring home chipmunks!
-Tibby

Tell Mumsie that Wire ox Terriers were not bred ta just sit there and look cute...nope...'n no siree...they were supposed ta chase the foxes inta the lair and grab 'em by the tail in their den.....we don't see any foxes around here but birds deserve a second look...and it looks like the Scruffman looked 'em down ta size.....horray Scruffman...yer a Wire Fox Terrier fer sure....why even we don't kill birds except on at the cottage a while back....we leave them ta the cats...who do a pretty good job too....

w00f's pups, heehee noooo its mine and ur not gittin it...way to go scruffy, me trys to catch 'em too...

Mumsie,
That's nothing! My basset hound (yes, basset hound) used to actually catch baby birds and eat them (chomp chomp). What she couldn't eat in one serving, she stuck in a hole to roll upon until they were well fremented and then ate those too.

It must have been all tthat celebrations!

Wow, send Scruffy over here. I've got lots of seagulls in my garden. Do you think he could take them out for me? Yours hopefully, J x

If you could give more detailed information on some, I think it is even more perfect, and I need to obtain more information!
Personalized Signature:金陵热线棋牌游戏中心,名城苏州游戏中心,云南信息港游戏,彭城视窗棋牌游戏中心,江苏互联星空棋牌游戏中心,广西休闲游戏中心,安徽棋牌游戏中心

I'm with you Scruffy, I love bringing nature into the house! I've brought in dead birds a few times. What a treasure! It makes my humans go crazy though and that's always kinda funny to watch. Hope you enjoyed it while it lasted, pal!
Woof,
Keeley