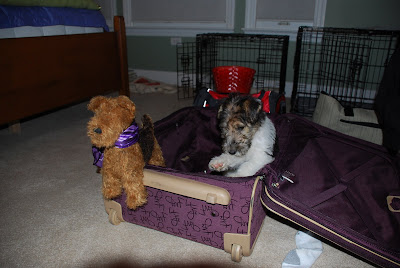 Clacie here....member me? Clone Lacie?????? Well, I was getting packed for a pleasant holiday, when this INTRUDER jumped in my PURPLE suitcase??? Who IS he? 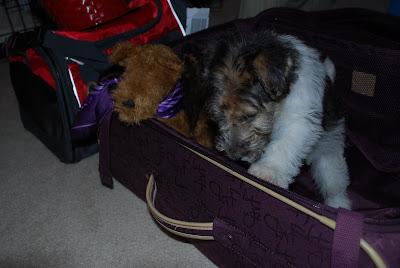 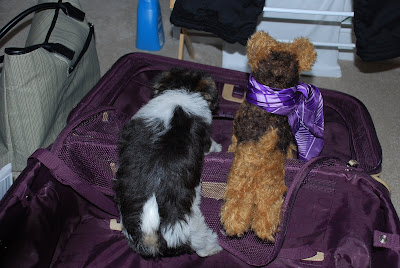 Maybe he's a Wheelie...but he doesn't have a red bow around his neck and he seems to be missing WHEELS. And look what an ample bottom he has compared to my diminutively sized derriere. 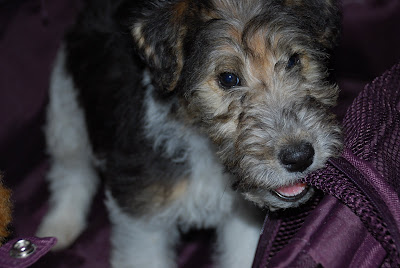 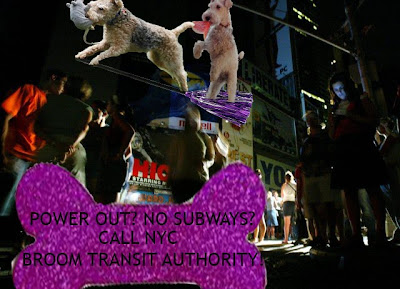 To all our friends who may be in the path of this storm, please stay safe...

Asta and I have a new business adventure....just in case the trains stop runnin' in NYC. You see my first passenger is a Rattie. Smart kid. Why Asta chose this time to satisfy her craving for Wally Mellon beats me.

Stock up on supplies and batten down the hatches.

Posted by Scruffy, Lacie and Stanley's Place at 1:47 PM 15 comments:

Of Earthquakes, Icing and Floofy Tails!! 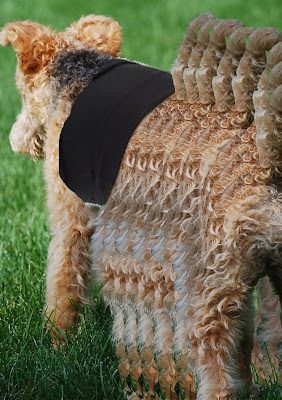 Scruffy here!! For once. Lacie hogs this blog. So...we had an Earthquake here in da Burgh yesterday as did most of the East Coast. I'm sure it had nuthin' to do with Lacie sittin' down a bit too hard....HAHAHAHOHOHOHEHEHEHHHEHEHEHAHAHA!!!!! 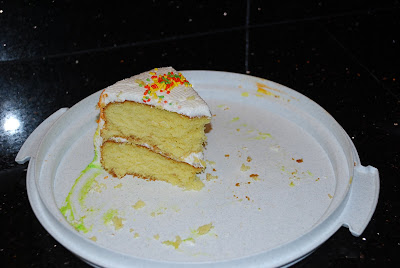 Lookit this...between Mumsie and Lacie they about killed this cake. No...wasn't any dogs' Barkday. They just buy random birthday cake and eat it. Pigs.... 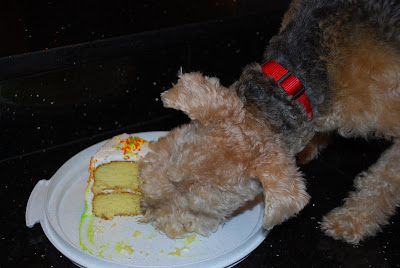 Look at her Gluttonous just digging right in.... 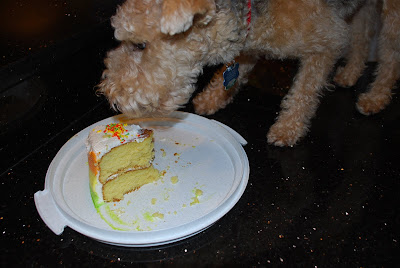 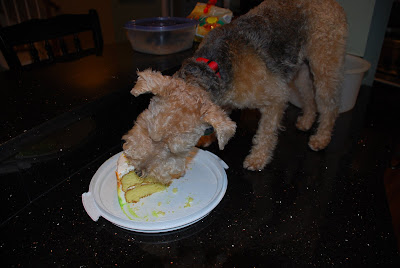 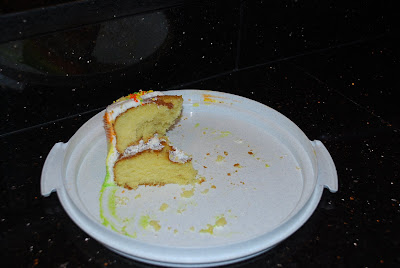 Yep. You can tell Lacie has been here...she sure does have a sweet tooth. A minute on her lips...forever on her hips. 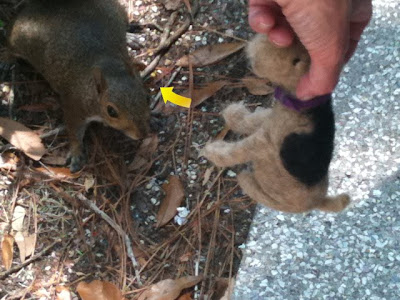 Hey, member this guy...? The squirrel who almost peed on Mumsie's foot down in Hilton Head...(puddle is marked by yellow arrow....) ???

Speaking of sweet tooths, take a look at this Pennsylvania Gray Squirrel....in his natural environment, partaking of natural foodables....he was in the hospital parking lot next to a car. 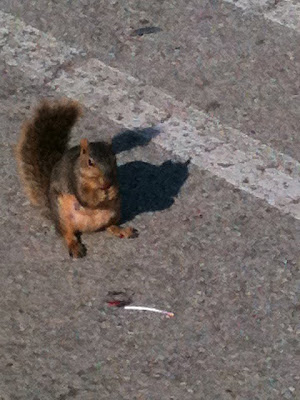 Yes, he's eating a lollipop...had gotten it off the stick and has it between his greedy little paws...

Mumsie dropped her keys trying to take the picture and he ran over to her like she was gonna feed him. (Judging from his belly, he isn't lacking for food.) The lollipop got stuck to the fur on his little paw and he was a tad confused.

Does that tail remind you guys of any dog over in EASTERN PA????

Posted by Scruffy, Lacie and Stanley's Place at 7:18 PM 17 comments: 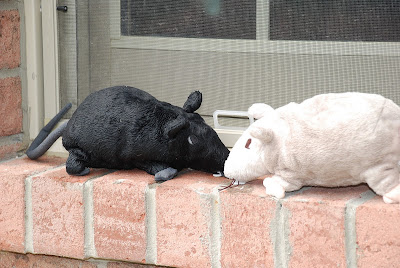 SHEESCH...we've been gone like forever...Mumsie's been sittin' on the sofa, eatin' bon bons instead of bloggin'.... 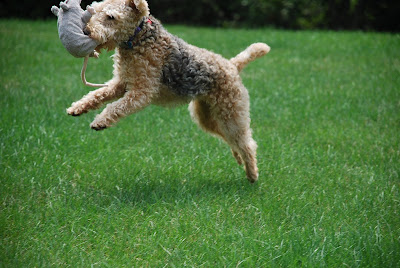 Did ya see these IKEA Ratties who have moved in???? Wicked good (as Agatha would say) poker players...and not bad company in the yardie!! 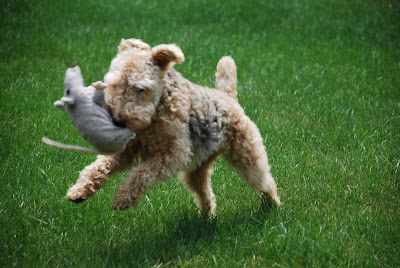 Nuthin' better than prancin' with a rat!! 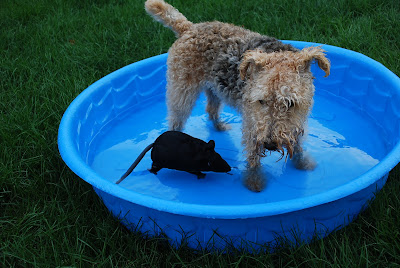 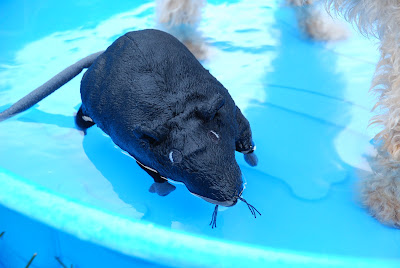 This kid looks demented..."What? You really just asked me to put sunscreen on your back?"
Ewwwwwwwww. 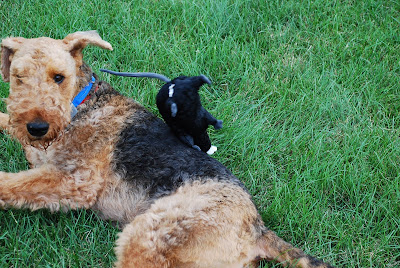 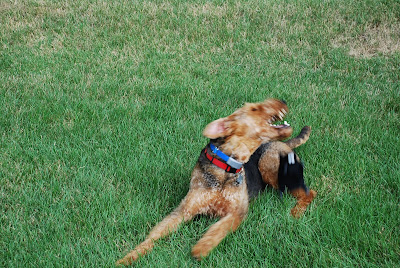 Hmm...Rattie actually got a rise out of the usual comatose Dale.... 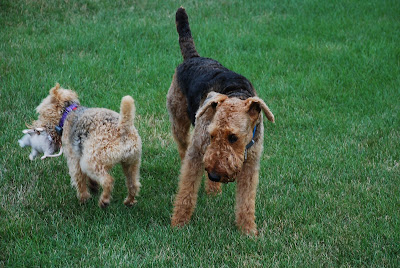 Ahh...it's all about body language...that Stan knows who is the BOSS in this house....my, my bum looks tiny.... 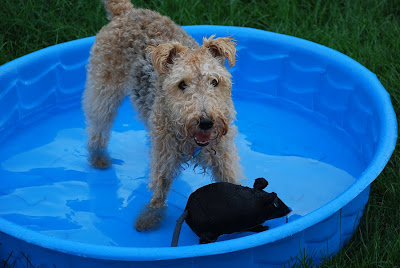 I'm not even sure what to caption this snap... 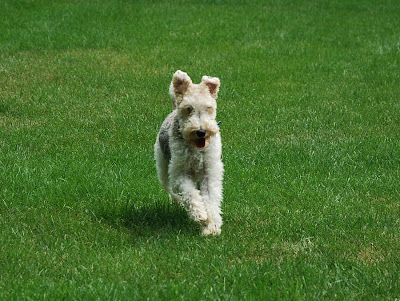 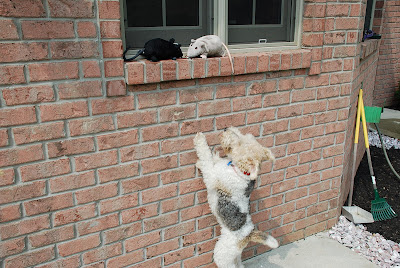 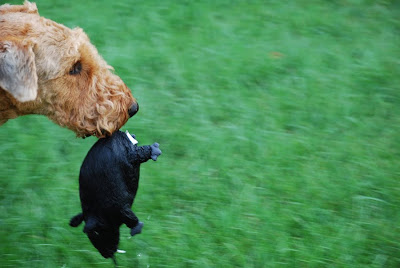 Drowned Rat? Naaaaaaaa....that kid still has a bunch of poker games left in him.....

So, ya know how Katie Girlie is gettin' a new brother?? Well, I've been in on the training... 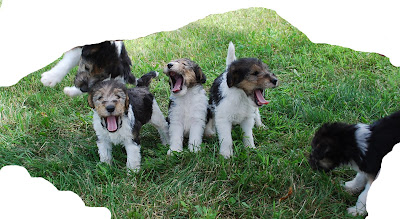 Posted by Scruffy, Lacie and Stanley's Place at 8:45 PM 19 comments: