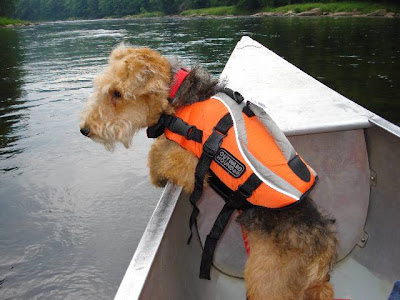 Hi Everybody!...thought those of you in the Northern Hemisphere might like a summer pic of me to hang on ur walls...ah...summer...the sun, the sand, the swimmin'...my boyfriend Butchy and I are gonna take his plane on a little trip to Bermuda this weekend...I'm feelin' the need to absorb a little Vitamin D....ahh...sun. Rumor has it Petey and his new lovepup Rosie are gonna be there...how big is that island??? 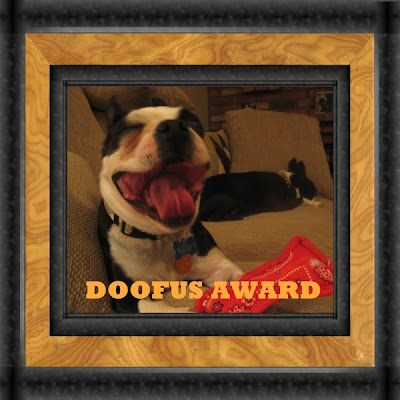 VERY FUNNY, TANNER....Look what Tanner gave me? (Lacie sounds like she's at "show and tell" at obedience school....) The Doofus Award for the Bidet Debacle...frankly, I am soooooooo over the whole bidet thing....a small error in judgement on the part of Lacie...but I am rather glad I dragged the darn thing home from Paree...makes for a great beardie washer... 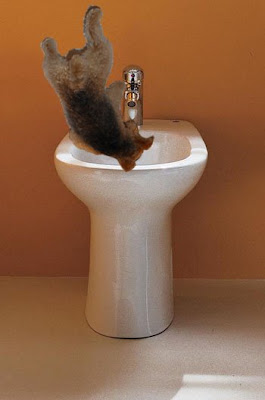 Um, Tanner...if I were going to have an award named after ME I don't think I would advertise its name as Doofus...BTW, Tanner and I are going on a Date...my idea...for some reason, that idea occurred right after he gave me this dubious honor. Thank you, Tanner. (Lacie giggles thinkin' bout that date...)
OK...Guess what...the BEST NEWS EVER!!!!
There's going to be another Lakie bloggin'!!!!! Go over and meet Penelope, an attractive girlie Dale from OHIO...she just started to blog...AND her family is adoptin' a Lakie bro for her next month....I AM SO EXCITED!
This seems like an excellent opportunity to educate you dogs, kitties and hammies on The Lakeland Terrier...the followin' is taken from the Lakeland Terrier Official Website.....

AN INTRODUCTION TO OWNING A LAKELAND TERRIER

BACKGROUND
The Lakeland Terrier originated in the Lake District of Cumberland, England near the Scottish border in the 1800's. He is related to several terrier breeds and is one of the oldest working terrier breeds still in use today. His diverse ancestors include the now extinct Old English Black and Tan terrier, the early Dandie Dinmont Terrier, Bedlington Terrier and Border Terrier.For generations, the Lakeland has been used in the Lake District for the purpose of exterminating the fell foxes which raid the farmer’s sheep fold during the lambing season. Whereas most terrier breeds have only to bolt their quarry, or to mark it by baying, the Lakeland must be able to kill the foxes in their lair. Despite his reputation for courage and tenacity, the Lakeland is a gentle and loving companion.
CHARACTERISTICS
The Lakeland Terrier is a breed with a striking appearance and a distinctive personality. He is a small, compact athletic terrier, varying in height from 13 1/2 inches and weighing approximately 17 lbs.In common with other long legged terriers of his type, the Lakeland has a hard wiry body coat, soft undercoat and plenty of furnishings on muzzle, and legs. His color variations include red, red grizzle, wheaten, blue and tan, liver and tan, black and tan, solid liver and grizzle and tan. The most common colors are grizzle and tan, black and tan and red.
PERSONALITY
The Lakeland Personality has a charm and companionability that are difficult to equal. His intelligence, sense of humor and zest for life make him an attractive choice for an active family. He is quite adept at being an "entertainment committee of one," and he is wonderful with responsible children. Although devoted to his family, he is not "slavishly" so. Lakelands are more inclined to enjoy the role of "buddy" rather than that of subordinate and they are not usually one man dogs.However, the Lakeland is endowed with his fair share of terrier independence and inquisitiveness. He is exceptionally quick to learn, but he can be a true challenge to obedience train. A sense of humor is mandatory on the part of a Lakeland Owner. 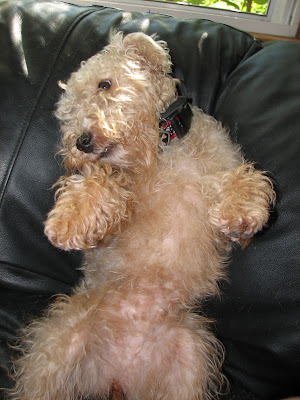 Bet you are thinkin' this pic is of me...Nopers...it's Stella...Goobergirlie, sissy of Gooberstan!
Now, I wanna point out that while Stella and I could be twinnies...sissies separated at birth we look so much alike BUT
We each have our own unique personalities...Stella and I could not be more different! And we celebrate this!!! 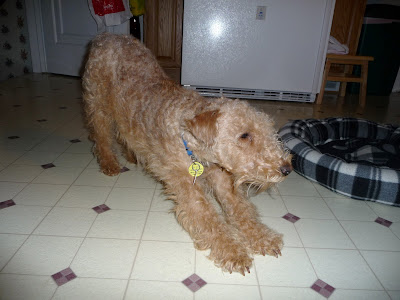 Lookie at this attractive Lakeland boy...it's Toby...Dewey Dewster's bro...look at his playbow and his zest for life...now his zest got him and Dewey into a LOT OF TROUBLE WITH A PORCUPINE...frankly, I'd rather save my zest for ice cream, pedicures and lemonade...(get it zest and lemons..hahahahahaha)...but we're all different, aren't we?? 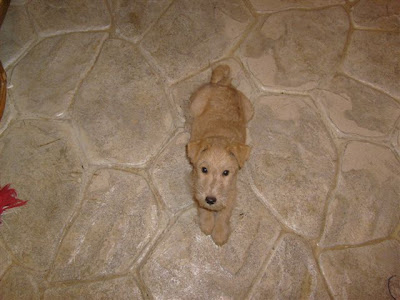 Lookie, lookie, lookie...it's Linus!!!!! He lives in Virginia now, but will be coming to live with his sissy Penelope soonest...I can't wait to see what kind of personality this handsome boy has!!
WOW....
Four cute Lakelands...as different as can be. Kinda makes ya think, doesn't it...bout how we stereotype other dogs/kitties/hammies and humans cuz they belong to a certain group....like havin' red hair...Um...well, ok, maybe that's not the best example; so my personality fits the red headed stereotype, but I'm sure there are some very laid back red headed dogs on the bloggie...you see what I'm gettin' at, don't you?
We all celebrate our differences and revel in them and learn from them! Isn't that what meetin' other doggies and other species from all over the world is all about????? And it's been such an honor meeting all of our friends!
Welcome to Penelope and Linus!!!
Joyful Barks,
Laciegirl


Posted by Scruffy, Lacie and Stanley's Place at 10:54 AM

Woo AND Tanner with khaffeine in your systems....

Welkhome to the new Lakies in the blogosphere...

I must show them all my beaWOOty!

Hugz&Khysses,
Khyra
PeeEssWoo: Did woo issue them THEIR skhreaching protekhtion? If they are in O HI O, they will have to HEAR WOO!

Lakies, lakies everywhere. Intelligent and funny. What more could anyone ask.

We're gonna go visit your new friends. Be gentle with Tanner, he doesn't know what he starts, half the time.

All I picked up was "A true challenge." So let me get this straight - the rest of us terriers only point out the vermin, but you're the assassin? (Imagines Lacie as seeing herself as a canine Angelina Jolie in Mr. & Mrs. Smith -ack!)

So Bermuda...what a "coincidence"...especially after you announced this to Butchy hours after I'd asked Rosie to go there for the weekend. Wouldn't you feel more at home on Alcatraz or Riker's Island? I hear they're beautiful this time of year.

However, if you're insistent on driving on the right side of the road in Bermuda without a helmet, I don't think we have to worry about running into each other. Be sure to have a few Swizzles before driving - a delicious refreshing local specialty!

Guess what Lacie. D & B went to their friends place just up the road for dinner on Wednesday night and guess what.....2 lakelands live there!!! It's true. They are Lola and Fritz and B got them a wubba to play with. They loved it.
Thanks for a great post.
We're going over to meet Penelope and her new bro.

We can't wait to hear all about your trip to Bermuda with Butchy! We sure hope this Island is large enough for all 4 of you!
We met Penelope yesterday! What a cutie! We can't wait for Linus to join her!

w00f's Pups, me will go meet ur friend after this..what does Sophie think bout this "date"...i thought u wuz gonna go on a date wiff Tanner...eeerrrr, congrats on ur doofus award..

Sweet BFF Lacie
Soo misundewstood..a few of us know how to distinguish between diffewent fwiends of the same bweed.I fow one celebwate all of you and youw diffewences and samenesses..I love you all!!!
And I wead lots mowe than petey in that descwiption..I guess he has a vewy showt attention span and doesn't wead , just scans..Oh well..Have a fantaboolous time in Bewmooda..do you need to bowwow my vespa ow pawasol???
Don't get a sunbuwn
love and smoochie kisses
ASTA

Well Tanner is certainly excited about the date, he said he is married though, so you must respect his wife. Whatever, give him hell Lacie!! woo!!

I am glad to meet the other lakies, and its nice to know that they are all very MUCH different than you. :)

Lacie . Crickey no wonder Scruffy and I feel threatened .."Lacie's must be able to kill those Foxies in their lairs"...AHHhhhhhhhh thank dog Petey is a Cairn....sorry gotta a run Lacie - urgent call of nature.....

Ahhhh Lacie...this one may be hard to get out of......I am not sure if I can help ya out with this one little buddy..Love Aggie

Ahhhh Lacie...this one may be hard to get out of......I am not sure if I can help ya out with this one little buddy..Love Aggie

Wow!! You Lakeland guys are really special. I never knew. I thought you were just different colors of us, WFTs. That's terrific!

Hey Lacie, I'm looking forward to reading about your date with Tanner! You do know he's married, right? Could be VERY interesting. J x

You are one articulate girlie, and I, for one, am glad to see you doing some community service by providing our friends with Lakie 101 education. I bet you could teach a graduate level class on us ~ there's so much to know.

Petey, as usual, just sees what he wants to see. He missed out on the fact that we can actually be very snuggly little critters when it is on OUR terms. We just like things the way we like them and aren't into PLEASING everyone we meet like some pups. That's okay if they want to do that, it's just not our way.

Stanley said that he knew he was getting a sissy with ninja skills, as was so pleased to hear it. One less dog needed for his secret service detail. (Get it? De Tail??? Actually, for him it's more like De Beard.) WhaaaaHaHa! I crack myself UP!

You are a credit to our breed and to terriers everywhere! Hope you have a great time in Bermuda (didn't know you were seeing Butchy ~ what about Archie?)!

we tried to adopt Bart - he's a retired show Lakeland Terrier, but his person wouldn't let us have him. she said that we were too big and that taking him to the dog park would make him aggressive (like us - hee hee hee hee hee!. so we are Lakey-less. but we have you as our crazy friends!

OMDOMD Stanley...me thinks Ms Penelope is your Auntie Penelope from Ohio! Ask her if she has a Grandma Rose, was her momma's name was Suzie-Q, does she likes her food under-cooked? Does she have a sissie named Amanda HugN'Kiss? If soooo its your auntie!!! XXOOO your Bro Dutch

We can't wait to hear the details of this upcoming date with Tanner - something tells us it is not all on the up and up.

What is Lillie going to say about you datin' Tanner, Lacie? Just wonderin'!

We've been over to say Hi to Penelope and we can't wait till her Lakie brother comes home!

Congrats on your Doofus award...I guess! Have fun in Bermuda!

Deaw a Nano Moos
My food luckily didn't float away..that would be twagic..I may have to loose some wieight, but I do not want to stawve to deaf
smoochie kisses
ASTA