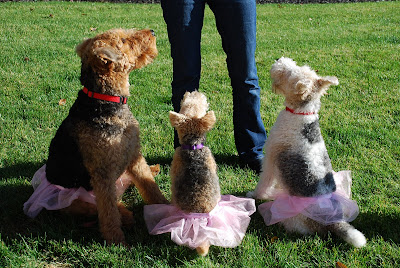 Scruffy here...lookie at what SHE did to us...and look at the girth of Lacie's BUTT...it has reached new widths... 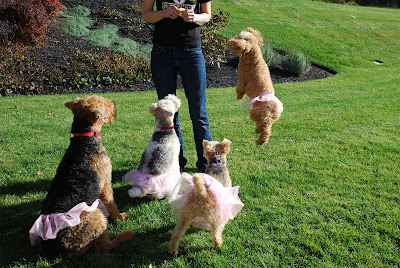 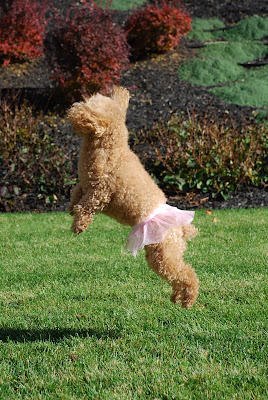 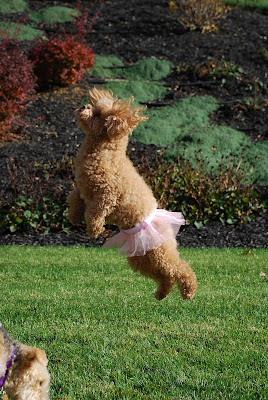 JETE!!!! Lacie is teachin' me the lingo...sheeshch.... Je ne parle pas francais or something very well..... 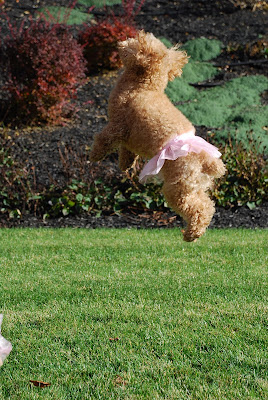 Evidently, Bayee has studied with the famous Kirov Ballet School in St. Petersburg (...her leaps are incredible...and the um "turn out" she has on her paws is amazing....) 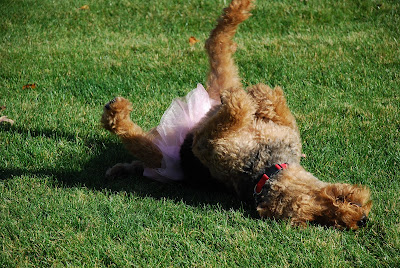 Evidently, Babystan did NOT study at that famous school...his Grand Jete landed him flat on his Dale head....sheesch....this sport er art is dangerous.... 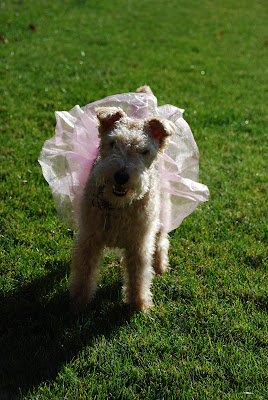 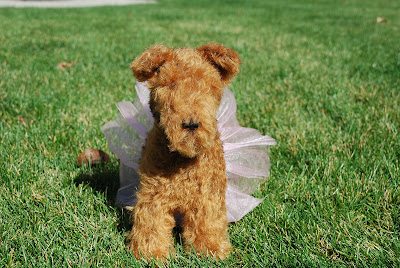 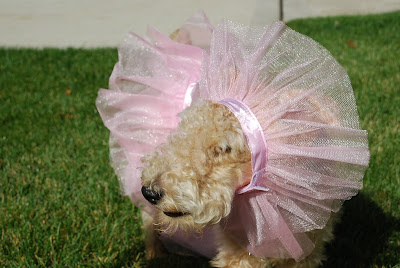 Um, well...somehow or another Baylee's tutu ended up on Lacie's head...good thing I'm tough and won't permit that indignity..... 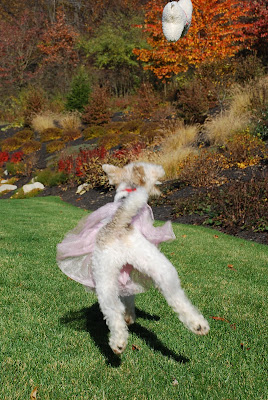 Well, the Scruffman's all over his JETES!!!!! 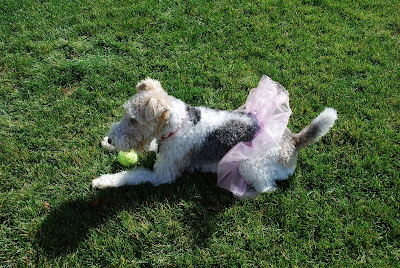 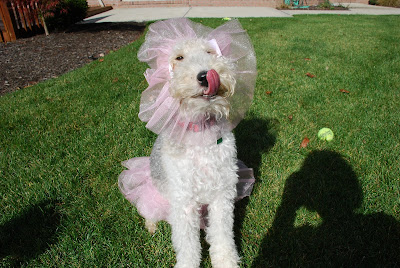 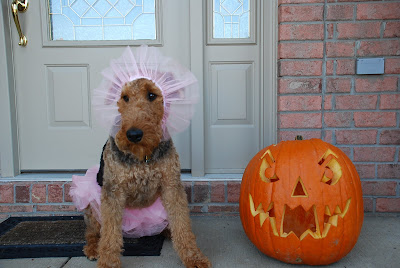 Well, it could get worse, couldn't it? 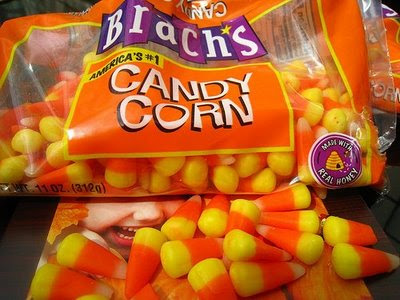 HAPPY HALLOWEEN, EVERYBODY!!!!! Feel free to fill your bag with some candy!!!!!
SPOOKY KISSES!!!!
Scruffy, Lacie, and Babystan
There is a rumor that we MIGHT have sent MANGO a tutu....
Pee ess
Mumsie here....the terriers were well rewarded for this year's participation in costumes. They each have a Get Out of the Naughty Corner FREE PASS....judging from this week, they'll be needing it soon....Happy Halloween!!!!

Posted by Scruffy, Lacie and Stanley's Place at 1:51 PM

That last picture of Babystan just about killed the Momma.
He always looks mildly traumatized!

I'm on pins & needles, waiting to see Mango in his tutu!

BabyStan looks just miserable. He is a most stoic and brave dude, not prone to silliness such as you smaller terriers.

Which photo was Lacie and which was Clacie? Hard to tell. I think Bayleee is ready to turn pro.

Hope Scruffers, er, expressive bottom is on the mend. Would hate to see him mess up his toot toot.

Oh boy. I am just speechless. Scruffy, my dear, you actually look nice in your tootoo and as much as I hate to say it, I kinda like it. But then again, you would look good in anything. You are just so handsome.

I think BabyStan needs to find a different sport or dance. Maybe professional wresttlng would be better.

As for Lacie, she is by far the star of the show with her leaps and pirouettes (whatever they are). She is so good, in fact, that I think she should forget about Halloween and look for a job in the Pittsburgh ballet!

Oh my dog!!!
I had no idea youw family was so full of pwomise in the awts..I'm calling ABT to see if they can all be admitted . Amazing leaps and talent, umm, xept maybe bStan, but he's just so da*( cute I'm suwe they'll want him..he can just look good on stage and lift the giwls, hehehe
Amazingly, those TooToos suit evewyone pawfetly..inclooding clacy..but umm, someone should tell Mumsie those awe NOT showew caps..I don't know how they dwess in the buwgh, but it's an absolute NoNo hewe
smoochie kisses
ASTA
Pee ess Lacie, I think you'w tiny dewwiew is bootiful wif youw TooToo on

DOH...................Scruffy you look like Nureyev.....uhmmm Stannie?????give it up.....maybe you can help catch Scruffy when he FLIES through the air...Lacie..darling you look adorable (as always) glad you are out of the corner( really ingenious I must say except for the grass part)....Love A+A PS PL@ is still looking for that tick stuff..she is hopeless

you pups looks pawsome and the pictures of Baylee are amazing!!!

Have fun trick or treating!

you guys totally crack me up everytime how scary will halloween be with mango in a tutu...

Well. Ummm. How to express our reactions? How about:

We are choosing to NOT claim authorship or to identify to whom we ascribe the individual descriptions. Leave it to say, we were in hysterics looking at this post. This was GREAT!

Sincerely,
Winston (the most neutral representative of our family) (You guys rock! Is this going to happen at our house?)

Y'all should start with your basic positions first. Sally Ann is rireing.
Mack

Hugz&Khysses,
Khyra
PeeEssWoo: I'm a natural kind of girl - I khan get dirty and I khan be khlean ;-)

HAHAhahahaHAHAHAHAHHahaahaha(snort, snort) HAHHAHAHahahahaha(oops, a few tears)HEHEHAHHAHAHoohhohohohohHAHAHAHAHA (rolling over on my back, may have a tummyache from laughing)hahahAHAHAHAHAOHHOHOHOHOHOHEHEHEEhehehehehehe (ah! Milkbones just came out my nose!)hehehAHAHAHAHAHahahahaahahohohohteeheehteehHAHAHHAHAHAHAHAH(wait, I've got to catch my breath before I can look again -- breathes into a paper bag) hahahahaEHEHEHEH ahahahahahahahahahahahahahaha!

Okay, I gotta take a nap then I can take another look at Scruffy - omidog I had to look - hahahaha - and BabyStan- man, how did you ever let her get away with this? And....LACieeeeehhehehehehehehee!

Baylee, on the other hand, looks awesome!

Your pal who's happy not to be a terrier in De Burgh,

Is it called a Too-Too because your tushie is Too-Too big to wear a normal skirt?

(BACK ON THE FLOOR, CACKLING WITH LAUGHTER - OOPS...I may have made a little stain I laughed so hard.)

You are all so funny - thanks for the chuckles tonight.

You all look adorable wearing the tutus!
Happy Halloween!
Kisses and hugs
Lorenza

Forgot to ask, I was laughing so hard before -- but who was the tooth model for the Jack-o-lantern?
Hmmmmm?

omdog that tutu on lacie's behind is like a ring around a planet! holy bajeezus. You guys need to have a SERIOUS talk with Mumsie, this is kind of crossing the line.

oh my! the things our humans do to us! and your mom wonders why lacie bit her! you do look adorable, especially with the tutus on your heads!!
Happy Halloween!!
Love,
Janie

Tres belle!!! And bootyfull!
Is it bad that I kind of want a tutu? I think my Mr. Jason might not let me have one, though. Boo.

Hey there all of you!!!
You look so cute in those tutu's! We came to tell you that we've just seen Mango in your creation...Eish! That was too funny!
Take care and lotsaluv to you all!
MAXDOG IN SOUTH AFRICA

OMG, we can't believe all of the crazy stuff that goes on at your house!
We just came from Mango's blog! Guess what he got in the mail?!

Found you guys from Mango, and after seeing his tutu I had to come see who sent it to him!
I think you all pull off the tutu a little more gracefully than Mango and Dexter!

OOOOOHHHHH HAAAAAAAhAAaaaaaaaaaa !!!!!!!!! Terriers you are TUTU FUNNY !! Ohhh hold one. Can hardly draw breathe through my square snooter from HAAAAAAA HAAAAAHHHH!!!!! Laughing so much. You three make the perfect Corpse de Ballet. But Baylee. A Prima. Ballerina. Thank you terriers.You rock.And Jette.

Well if yer not humilated....ya should be...all of ya....I can tell ya there is absolutely NO WAY that we would be caught dead in those outfits....ya all deserve ground steak fer a month......except fer Lacie....Happy Halloween....

Happy Halloweeners guys!!!!
Can you believe it? Mom letting us visit some. geeeez. BTW, hoomiliating Stannybaby that way well, just not right (funny, but not right.*Sunny tries not to laugh*)
Uh, Stannybaby, I, well *sunny blushes* I know I haven't been on the bloggies much lately but *battes eyes, flips long haired ears back* well, truth is I have missed you..... We never got to even do our movie night. Now I see you asked miss asta to go for a walk with you. *sighs* If she is who you want, well, I won't stand in your way...so think on it Stannybaby *winks* because I don't play second fiddle well.

psssstttt Lacie? How was that??? too much???? Been missin you girlie! AND lots of fun too I bet.
I have been trying this to die for shampoos for my long luxurious ear hair. Does wonders. I should send ya some
All for now. Be sure and let me know if you think I came on to strong to Stanny. I'm trying but I have a looong way to go before I catch up with you in the art of flirting!
Hugs
Sunny

Lacie, I was all set to send you a nasty email telling you to get your paws off my boyfriends and all such things, and then I hear mention of Russian ballets and well, as you know I was once the principal dancer in that Russian ballet.

You do look smashing in a tutu. Can't wait to see Mango in his. Hope it's pink.

The Black and Tans. said...

Lacie you look so adorable in your pink tutu. Pink suits you so well!

Umm Stanley we are a bit worried about you, well actually more than a bit....very worried indeed. As a handsome male Dale you really shouldn't be wearing a tutu, please promise us you won't be walking the streets on Halloween night with it wrapped around your derriere.

that was great until the final picture, oh poor stan.
You all look classic.
Winnie Woo

Don't go out in public with that get up on.

You must let me know what company you'll be performing with. I'd love to see you in Dog Lake or Bonecraker. Pups in Toyland is my fav!

I think you all looked divine in your costumes. It's like being at Rio carnival for Halloween!


Thanks for the candy.
Ruv, Autumn

Hey Lacie! What do you mean pack my balls? They go wherever I go automatically, right?

My mom person laughed so hard she says she almost peed herself! Great outfits. I just pray she does not find a tutu in my size before next Halloween!

I think Lacie is the prettiest ballarina 've ever seen. sigh.
XOXOXOX-Hootie