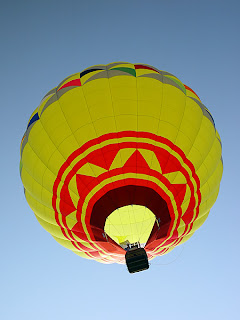 What a bootiful day for a balloon ride!!!!! My Sweet Koobuss and I have been attending all of the Penn State football games this fall! Transportation has been something of an issue. We went by helicopter the first time, and we had a little issue of the mountains in Happy Valley (State College, PA) hiding from us in the fog. It was such a lucky thing that Koobie brought along those parachutes! I had a small ankle fracture, but it quickly healed by the next week.
We went to see Penn State play the University of Michigan last week. Due to my ankle, Lacie rented and piloted a Lear jet...she got a little confused and took us to Indiana as she thought we wanted to see Michigan State play Notre Dame. All she heard was the word Michigan. After that game, I never want to hear the word Michigan again.
She has "Sir Dunstan" in from England this weekend...he lives with Jackson in the UK. You need to go to his blog to get Dunstan's true picture on his most recent post. He's much older than Lacie, but he's a gentleman, and I think they get along well. She drags him everywhere.
We decided to go by hot air balloon to the game in Illinois today. The game is in the 4th quarter, and is quite the nail biter. I had taken eggs, toast, bacon, hot coffee, and donuts to cook and eat on the ride. Here's a picture of us as we float over Pittsburgh, that Mumsie took after we picked Koobie up!!!! 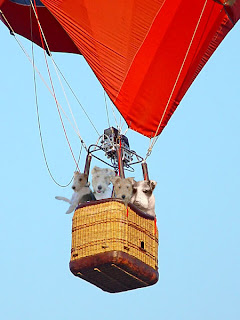 Speaking of toenail biters, Lacie had a little issue landing the balloon. She accidentally brought it down in Lake Michigan. That Koobie...she brought life preservers for us all. Thankfully, that nice hooman rowed out to us and helped us get back in the air to get to the game!! 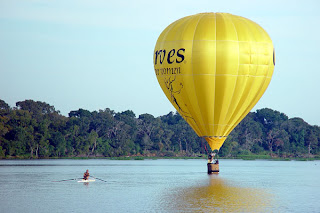 I think Penn State plays at home next week...I hope so...all of this travel is exhausting!
Relayed via balloon satellite,
Scruffy
Posted by Scruffy, Lacie and Stanley's Place at 2:32 PM

Sir Dunstan? When was he knighted? I must have missed it. Don't tell Seymour et al or they'll all want to be called "Sir" this and "Sir" that! Glad that Dunstan is OK. I hope that Lacie is looking after him. Don't worry if he's a bit rusty, he takes it all in his stride. J x

Ya know...you might want to consider one of those humungous big screen plasma TV's. You'll save money, you'll be safer, and dryer, and more comfortable.

What a splendid day fow a balloon wide..you all look a tiny bit scawed..but all's weel that ends well!
Hope you had a stupenjopus day!
Get home safe with no bwoken bones and no wheels off
smoochie kisses
Asta

Thanks for the balloon ride to Illinois and other places, such as Lake Michigan. Breakfast was delicious, Scruffy. You're a good cook. I like my bacon and eggs burned.

I'm glad that the next game is at home.

It's been a long day, getting up so early and then home so late. Think I'll go to bed.

Gee we have to endure riding in a boring car whenever we want to go anywhere. You sure know how to travel in style. Pity about those minor mishaps.

You guys should have stopped by on your way down to U of Illinois. We could have used the ride. My dad is a huge Illinois fan, and I'm forced to watch all the games. I'd much rather see it all in person. Good Luck getting to Happy Valley next week & give Joe Pa a lick for me!

Lifes just one round of adventures for you two - love it.
And, now you've been hot air ballooning something I've always wanted to do - green with envy!

Whoa! What a gorgeous day to enjoy hot balloon ride!!!! I love height!! Next time I would love to join you!!!

Thank you for telling me about Kawartha Lake district! My pawrents and I never visited there so we just checked some links and bootiful photos. It's so close from here. We have to visit there one day soon!!

The hot air balloon looks such a fun trip. :) Maybe you doggies can fly to SingaPaw to visit me on your next trip

Just popping by and enjoyed reading both of your stories about living together as a pair of wires. I am real amazed at how you (Lacie) tamed Scruffy! Maybe you can teach me a few tricks to prevent Mango from bullying me!

Woooooow! I think I'd freak out being on that huge hot air balloon...

Hey Scruffy and Lacie - if you fly over Indiana again, stop by IU and come visit me!

Hi, friends
Sure you know how to spend a great weekend! Looks like real fun going to those places!
Did you were scared of riding in that balloon?? Looks awesome!
Have a nice day
Lorenza

I can't believe you got to ride in one of those really big balloons! What fun! Did you get all gussied up for the game? Did you dye your hair the appropriate colors?

you should contact old Joe the coach, I bet he'd arrange for some good transportation for you!

Hey Scruff and Lacie,
Yes, we are all going to Montgomery on Sunday. I went last year too and enjoyed it, I was a good boy and just snoozed on Mom's lap. I wish you were coming too. Can you remind me where you guys live? is it in Pittsburg where those Steeler dudes hang?
I love reading your adventures, your blog is #1 in Creativity for sure!

PS Mom laughed out loud about your tail curler theory.

OMG!!!! AIRE-balloon ride????? That's way too cool! Hey, maybe little Lacy is a swimmer too? And she was trying to take the plunge so she landed the balloon in water???

You are so transportationally creative. I've never seen a hot aire balloon. Can't imagine where Lacie found the time to learn how to navigate one.

Lacie, just wondering, is Dunstan as stiff as he looks or does he loosen up once you get to know him?

Hmmm landing the balloon on water seems so scary! Good thing the next game is at home...my mommy is PSU alumni, Go Lions!