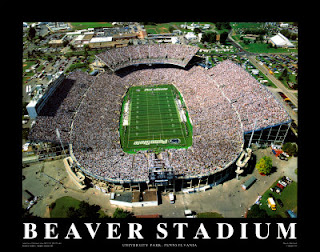 Well, well, well...Little Miss Perfect seems to have fallen off of her pedestal...HAHAHA!!! As you know by now, Koob, Dunstan, Lac and me follow Penn State around the country this time of the year. Things usually go very smoothly with the trips! But this week...

First of all Dunstan, Lacie's main squeeze went back to the UK to visit Jackson who is a bit under the weather. Lacie has been very sad....being the good big brother, I encouraged her to invite a friend to go to the game with her. I told her Dewey, Koob's blogless friend who also lives here in Pittsburgh would be perfect for her.

Lacie...actually, Scruffy begged Dewey to take me cuz Dewey has the hots for Koobie...he tried it as a diversion tactic!!! Plus Koob had already invited him!!!!!

Koob picked us all up in her little red car...it was quite brisk as it's a convertible...we were a little late so we let Lacie use her nose for the GPS system. Um....does this stadium look like Beaver Stadium??????

Koobie and I were court-ordered to clean up Beaver Stadium after the game this week. (It was due to a unfortunate misunderstanding about us accidentally landing Aire Ruby on the field during half time last week.) We cleaned up this whole stadium after the game...then realized it was the wrong one. By the time we finished Beaver Stadium, Lacie and Dewey were gone. We looked for them at the Creamery....Lac loves ice cream, but no dogs. So we, uh,got tired waiting and drove back to the Burg.....

Dewey's dogmom Asta left some revealing remarks on Koob's blog about Dewey and Lacie's whereabouts. I'm not going to repeat them as they are somewhat tarnishing to Lacie's reputation. She did say she was gonna box Dewey's ears!!!!! 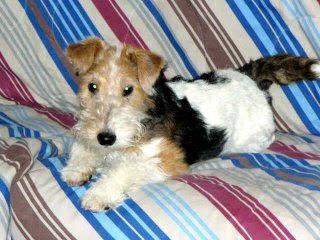 Here are 2 pix of the Dewster...one woulda been enough, but blogger was being difficult. Um...he is a rather handsome dude. I don't think he's gonna be as easy as Dunstan is for Lacie to pull around. 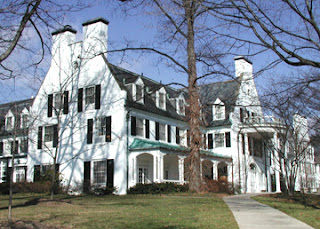 Mumsie got a call from the Nittany Lion Inn in State College....about some charges Lac made to her Mastercard. Many charges....evidently the bar there is very nice. I'm sure that there was no impropriety involved...Lac will have an excellent explanation for the weekend, I'm sure!!!
Scruffy

Posted by Scruffy, Lacie and Stanley's Place at 3:05 PM

You must be the good dog this week. I can't believe that Lacie and Dewey spent the weekend in State College together. He took all the balls from here so I can't play while he is gone, but.....boy, can he play.....hope the Greyhounds are there by now and they are on their way home. Got my boxing gloves out.....

Dewey Dewster here, listen can you put me up for a few days til things cool off 'round here. There's a little matter of some large charges for drinks on my bankcard and then I lost some of Mom's balls on the football field. Ya think those guys woulda let me just kick them around a bit.......
nah, they had to chase us off and scoot us out the gate.....

Dewey, my Man...no problem with u stayin' here...as long as Mumsie remains in her usual state of ignorance, it will all be fine!!

Those greyhounds move, don't they?? Lacie looks a little worse for wear!!!

Oh man you cannot turn your back for a second!! Mom has been to that Nittany Lion in when she was in high school so she doesn't know about the bar but she said the rest was real nice!!

I'm not saying a word about anything to anybody. My lips are sealed. Scruffy and I were so busy cleaning, when we finally arrived at the right stadium, that I missed everything.

So, Did your team win this weekend or what?

Sheesh, all this other stuff is not important, right. Tell your mom that. She needs to be a fan!

Wow, you two have been naughty lately. Can I join in the trouble? He he he! Ok, Ok, Mom wants me to retract that comment. You may have caused some trouble, but you sure have had fun getting into it. Keep up the naughtiness, it makes for some great stories!!

Hey Scruffy,
Wow, that Lacie sure can get into some hot water eh?? Is Kousin Koobie mad at Lacie now since she took off with Dewey?? And what about poor Dunstan?? He is gonna be so bummed......
Too bad you guys cleaned the wrong stadium. That was a lot of hard work. Maybe we should come to the next game with you to keep an eye on Lacie, hehehehehe!
Luv & Wirey Hugs!
Butchy & Snickers

Scruffy
You have the best adventoowes..I think I need to move to the Burg..I can't believe you got the wong stadium cleaned up,ad as fow Lacie, what can I say, Dewey is a vewy handsome guy!! I just hope she doesn't bweak Dunstan's heawt..I mean he went home on a mission of mewcy,and the second he's gone.....
I'm feeling much bettew,but I could use the company and a little gossip and pillow fluffing...
smoochie kisses
Asta

Crikey, you lot get into all sorts of mischief. We can hardly keep up with all your adventures lol.

What a handful she is, little madame. I hope Cassidy will be better behaved!

Oh oh...he sure is in biiiig trouble. She better run for her life now!

Hi, friends.
That proves that we can do everything possible just to have fun!
Have a nice day
Lorenza

Blimey, I wouldn't want to be in your shoes when you get home! J x